To share your memory on the wall of Roger Mockli, sign in using one of the following options:

Roger was born Feb. 1, 1953 in Preston Idaho to Leo Alfred and Ondelyn Mockli. The family later moved to Layton, Utah. Rog was the third oldest of seven children.

After graduating from Layton High School, Roger joined the military and served in the Army (Company B, 1st Battalion, 28th Infantry (Brigade), 1st Infantry Division). He was deployed to Korea during the end of the Vietnam War. Afterwards, he worked as a miner in Wyoming, a drywall finisher in Utah and Idaho, and an environmental sampling technician at the Idaho National Laboratory.

From a young age, Roger was a very talented artist. He turned his skills into a lifelong profession on the side. He created woodburnings and oil, acrylic, and water paintings. He loved taking his art to the outdoor art shows and interacting with people.

In 1980, Roger married the love of his life, Traci. They had two sons, Andy and Dillon. Rog loved his family and they meant the world to him. His family grew with two daughters-in-law, Sara and Sammy, and four grandchildren who he adored (Odin, Freya, Porter, and Paige.)

Rog always loved the outdoors, fishing, and camping. He reminisced about his dad and mom jamming the whole family into the station wagon to go camping and being chased back to the car by a bear! As an adult, he failed to recreate the bear chase for his own family’s camping trips, but they had fun nonetheless.

Roger was a jokester, prankster, and life of the party. He was full of life and never in shortage of devoted friends. He will always be remembered. We all will miss his laughter, humor, old-timey western slang, his generous nature, advice and perspective on life, and his inimitable personality. We will miss our Rog.

A celebration of life will be held on July 10th. Contact family for more information.
Read Less

Receive notifications about information and event scheduling for Roger

There are no events scheduled. You can still show your support by sending flowers directly to the family, or planting a memorial tree in memory of Roger J. Mockli.
Plant a Tree

We encourage you to share your most beloved memories of Roger here, so that the family and other loved ones can always see it. You can upload cherished photographs, or share your favorite stories, and can even comment on those shared by others.

Posted Jun 12, 2020 at 11:30pm
So sorry to hear of your loss with this sad news. I always figured that Rog and I would get back together someday to recount stories from our days exploring secret trails and hideouts around Layton. Every memory of Rog contains bits-n-pieces of his mischievous spirit punctuated by his beaming smile. My heart swells with pride to have been his neighborhood pal. Those days of just playing catch or shooting hoops at the E.M. Whitesides playground filled endless summer days and late afternoons that I would gladly travel back in time to visit for an hour or two. We learned to play sports together, swim together, hunt & fish together, and play tricks on each other with dares to try something new. A great day with Rog was catching frogs and pollywogs. Then later making up our own healing rituals such as squeezed-out twinkie cream filling to rub on cuts and to cure warts. We played like Tom Sawyer and Huck Finn together exploring through mazes of thickets and creek hollows. And we rode our bikes along dirt trails from Andy's Pond to Ft Lane Shopping Center.

In about the 5th or 6th grade, we had many long, serious talks about this newly discovered bother called 'girls'. At first we were forced to 'do-si-do' with girls during square dancing. Which we both hated because we would much rather be outside playing dodgeball or freeze tag. But I knew our lives were changed when I caught Rog walking back into class beside an actual girl. I thought he needed rescuing so I shoved her aside to save him from cooties. Rog blushed a little, then told me that she was his bestest square dance partner. With his freckled face I could catch him blushing pretty easily.

Rog was responsible for giving me daily side aches from laughing so hard at his goofy impressions and mannerisms. Just one look into those lively eyes and I would lose it, even clear across a classroom. Or even worse, while we were trying to behave at church. Yep, I actually recall lots of giggling breakups when he and I were supposed to be reverent in church. Somewhere, stashed in the hymnbooks of Chapel Street church pews are some of his creative doodles. Rog truly was a gifted artist. He had a distinctive style and I used to watch in amazement as he created faces on cartoonish characters that were as good as anything I ever saw in comic books.

I will forever miss your laughter old Bud. And those doggone squinty beaming eyes. Thank you all for sharing the above photo. That is pure Rog. He looks ready to go fishing or camping. I told him once that I could hardly believe he was capable of growing such an authentic mountain man beard. I accused him of letting his hair grow longer to hide what he called, “his dadburn cowlick”. I have this irresistible urge to dial up 376-3375 and say, Rog, I'm on my way to play!
My sincere condolences and best wishes and love to you all. Steve Whitesides

Above message from Steven Whitesides (he is not active on Facebook) 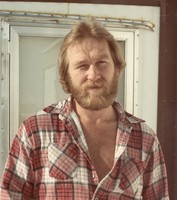