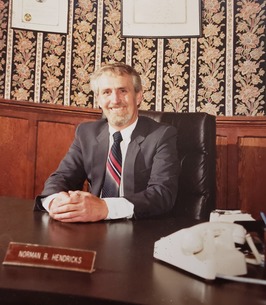 Norman Byron Hendricks, 86, beloved brother, father, grandfather, respected attorney, and faithful friend, died peacefully on Tuesday, March 2, 2021, in Idaho Falls, Idaho.
“Norm” was born April 11, 1934, in St. Anthony, Idaho, to Emma Mae (Blanchard) and Alonzo James Hendricks. He was a cherished brother to Wilbert Alonzo Hendricks, Ross Kent Hendricks, and Ronella Mae Hendricks Widdison. After Norm’s mother died when he was two, his paternal grandmother, Jane Watson Hendricks, began raising Norm and his siblings at the age of 65. Norm graduated from Madison High School in 1952. After high school, he enlisted in the U.S. Army and was stationed in Korea. He attended Idaho State University from 1955-1957, and also worked during that time as a bookkeeper for the R. K. Hart & Co. Accounting Firm. Norm completed his Accounting degree at the University of Utah and went on to get a Juris Doctorate degree there in 1961. He practiced law for several years in Salt Lake City, Utah, where he met his future wife, Elaine Wimmer. Norm and Elaine had two daughters, Monica Lynne and Kimberlee Anne, before divorcing in 1969. Norm was also a dad to the three younger children born to Elaine after the divorce. He always welcomed Monica, Kim, Ken, Melissa, and Camille and their families to his home in Piedmont, and he was most proud of the fact that he could help his children and grandchildren in their lives.
Norm began practicing law in California in 1965. While still maintaining his law practice, he campaigned to become an Emeryville City Councilman in 1974 and served a term in that capacity, working to build the city that exists today. He was a Judge Pro Tem in the Berkeley Magistrate Courts for a period of time, and he also taught several classes. He enjoyed travelling, and he traveled extensively in Mexico, where he had lifelong friends. Norm lived the last 37 years of his life in Piedmont, California. His later years were greatly enriched by his rescue dog, a Min pin named Astro who went with Norm everywhere. Astro and Norm were a cheerful sight to their many friends on Piedmont Avenue, as they went down for breakfast and a stroll nearly every morning. We would like to thank the friends and neighbors who were like family to Norm, including Linda and Dennis, Veronique and John, Gail, Christine and Arthur, Robbie, Jeanne, Linda and Quincy, Ron, Lynn, and Gigi.
Norm will be remembered for his kindness, generosity, and love of family. He is survived by his sister Ronella (Don) Widdison of Rochester Hills, Michigan; his sister-in-law Irma Hendricks of Gilbert, Arizona; and by his children, Monica Couch (David) of Idaho Falls, Idaho; Kimberlee Smith (Matthew) of Saline, Michigan; Kenneth Goodrich (Claudia) of Ogden, Utah; Melissa Adams of Salt Lake City, Utah; and Camille Hastings (Brian) of Hurricane, Utah; his grandchildren Victor, Stephanie, Dylan, Sealenea, Kelly, Valerie, Jeffery, Isaac, Kevin, Patrick, Leah, Ezra, Brooklyn, and Hank, as well as nieces and nephews and other cherished extended family.
A graveside service will be held at 1:00 p.m., on March 13, 2021, at the Rose Hill Cemetery in Idaho Falls.