To share your memory on the wall of John Yeates, sign in using one of the following options:

John’s education provided opportunities to be involved in numerous engineering projects around the country. He served in the US Army during World War II, and was deployed to Guam, where he designed lighting systems for military airfields on South Pacific islands. After the war in 1946 he resumed his engineering career at the Engineering Research and Development Laboratory at Fort Belvoir, Virginia. While there he met Annette Joraan Dahle of Saskatchewan, Canada who was working at the British Embassy. They were married in Washington D.C. on November 11, 1950.

John and Annette moved to Idaho Falls in 1951 where John worked as an electrical engineer at the National Reactor Testing Station (now Idaho National Laboratory) west of Idaho Falls until retirement in 1981. His proudest achievement was succeeding in designing and managing the power line connection of a small nuclear powered electrical generator to temporarily provide power directly to the town of Arco, Idaho in 1954. As part of President Eisenhower’s “Atoms for Peace” program, this demonstration became an historic milestone that helped launch the nuclear power industry.

John and Annette raised 4 sons; John (LeAnn) of Idaho Falls, Brad (Noriko) of Augusta Georgia, Wesley (Maribeth) of Meridian Idaho and Gaylen of Bozeman, Montana. He had 5 grandchildren and 3 great grandchildren. His beloved wife, Annette, passed away in 1981.

John’s love of music was given to him by his mother who was a classically schooled pianist and a local music teacher in Cody. He sang tenor in church choirs and played his violin with church musicians and with the Old Time Fiddlers for years. He also enjoyed woodworking and the outdoors where fishing, hunting, camping and hiking were his favorite activities.

John lived his life as a sincere believer in the Lord Jesus Christ. He faithfully served at the First Lutheran Church in Idaho Falls in numerous capacities over the years. He was passionate about the development and support of the Luther Heights Bible Camp in the Sawtooth Mountains of Idaho, devoting 20 years to board membership, construction and financial management. He was a member of the Gideon Bible Society where he actively worked to provide bibles to people locally and around the world. He will always be remembered for his kindness and generosity.

John passed away peacefully at the age of 101 on November 1, 2020 in Idaho Falls, Idaho surrounded by his loving sons.

The family will receive friends for a viewing at Buck-Miller-Hann Funeral Home 825 E. 17 St. Idaho Falls, Idaho on Thursday November 12, 2020 from 5:00 to 7:00 pm. Graveside services will be conducted by Pastor Fred Grundmann at Fielding Memorial Cemetery Friday November 13, 2020 at 1:30 pm.
Read Less

To send flowers to the family or plant a tree in memory of John Yeates, please visit our Heartfelt Sympathies Store.

Receive notifications about information and event scheduling for John

We encourage you to share your most beloved memories of John here, so that the family and other loved ones can always see it. You can upload cherished photographs, or share your favorite stories, and can even comment on those shared by others.

Posted Nov 13, 2020 at 12:13pm
John was always a good friend. So many years I can't begin to count that far back. I still remember the birthday celebration at church with the 99 bottles of (root) beer. He has run the race and now has won the trophy. Cal Miller
Comment Share
Share via:
HS

Posted Nov 12, 2020 at 10:19am
John has given us all a great model of how to live a full, Christian life. Our thoughts and prayers are with you. Love, the Johnsons and Smiths

Peaceful White Lilies Basket was purchased and planted a memorial tree for the family of John Yeates. Send Flowers 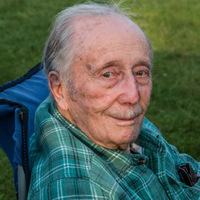