To share your memory on the wall of John Ecklesdafer, sign in using one of the following options:

Jack started early in life being a project person. Still in elementary school, he built a brood house for his mothers large chicken flock. He worked all through school to pay his way to what is now Michigan Technological
University, graduating with degrees in Mining and Metallurgical Engineering. His Uncle Ernie was a prospector (among other pursuits) living in Missoula. He invited Jack and some of his engineering buddies out west to do surveying and diamond drilling on a hot prospective mineral deposit along the Salmon River. (That deposit is still there but is in the Wilderness Area now.) Thus the attraction of this area upon retirement.

Jack had to go to California to find his wife, Elizabeth Jill Hilfiker. They were married in her home town of Eureka, then travelled east to find employment. Such wonderfully restrained in-laws to let their "baby girl" go without even a lecture!

His primary work through the years was with Armco Steel (now A-K Steel), first in Butler, PA, where Jack worked in the mill. It was here their three sons, Donald, Eric and Garet were born. Their next home was in Ohio, where he worked out of the headquarters for Armco. Next was an interesting switch for an engineer type person - he joined the sales force in Baltimore, MD, dealing with stainless steels and specialty alloys. Customers loved it because he could solve their manufacturing problems. To Daddy's delight, daughter, Heidi, was born here.

A small company was formed, with Jack's expert help, to sell primarily stainless boast shafting. He had always wanted to run his own business and this was close. Then the president of the company died suddenly of a heart attack on Christmas day. In the midst of this tragedy, Jack was asked to take over. So home became Portsmouth, VA, for about 3 years before retirement to Idaho Falls.

Heidi moved with us but it wasn't long before she was in Moscow. Our "boys" were married and scattered. St. Paul's United Methodist Church folks immediately became our second family. Among other important qualities, it was a good place to meet great hunting and fishing buddies.

All through married life, Jack and wife, Jill, made substantial improvements to every home they owned. Their last really big project was to build an off-grid home on Panther Creek (almost the Salmon). Watching the elk move down the mountainside in the early morning, picking ripe apricots for cobbler, seeing a flock of 300+ mountain bluebirds descend on the ground to eat grasshoppers, hear the rumble of Panther Creek tumbling over boulders, watching the gliding flight of eagles makes a person marvel at God's Great Creation. Jack always wanted to fly like the eagles - now he can.
Read Less

Receive notifications about information and event scheduling for John

There are no events scheduled. You can still show your support by sending flowers directly to the family, or planting a memorial tree in memory of John Gordon Ecklesdafer.
Plant a Tree

We encourage you to share your most beloved memories of John here, so that the family and other loved ones can always see it. You can upload cherished photographs, or share your favorite stories, and can even comment on those shared by others. 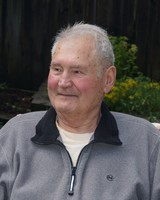