To share your memory on the wall of James \"Jim\" Bell, sign in using one of the following options:

Jim was born July 19, 1926 in Rupert, Idaho to Edith Stacy. Shortly after, the family moved to the Oakland, California area. The family returned to Cassia County several years later. Jim finished his schooling in Southern Idaho, graduating from Burley High School in 1943. After high school, Jim joined the Navy and served in the engine room of an LST (tank landing ship) in WW II’s Pacific Theater. Among other locations, his ship had been active in Leyte (the Philippines) and Okinawa. Jim was honorably discharged in 1946 at the rank of Motor Machinist Mate First Class.

Jim attended the University of Idaho, earning his degree in Electrical Engineering, thanks to the GI Bill. After graduation, he joined General Electric, working mostly in Syracuse, New York. There, at a party held for test engineers and student nurses, he met his future wife, Jean. They married in 1952 and had two sons, Larry and Jimmy. Later, Jim worked for Westinghouse, in Maryland, where their family resided in the Baltimore area. In 1967 Jim returned to Idaho to work as a manager at the INL. After several years, tiring of the daily work commute, he pursued a second career. Jim opened his own business, working as an accountant until his retirement in 2012.

Jim and Jean enjoyed traveling around the United States and to many countries around the world. Together they enjoyed many activities, including fishing, softball, cross-country skiing, playing cards, square-dancing, and entertaining. They loved spoiling their grandchildren! Jim was a life-long bowler and a skilled hand at blackjack and poker. He won many bowling awards, and even won several tournaments in both bowling and cards. During his ‘second career, until just recently, “Jimbo” (as his many Jackpot friends called him) loved going to Jackpot NV to play cards, meet new and old friends, and to provide tips to any who would listen. From his well of life-experience, he always seemed able to draw up an interesting story to compliment most any topic of conversation. He was highly intelligent, observant, and thoughtful.

Jim was an active Protestant and had held most church leadership positions within the Harundale Presbyterian Church in Maryland, as well as at the (former) Idaho Falls First Baptist Church. Until recently, he had attended St. Paul’s Methodist Church.

Due to the ongoing COVID-19 pandemic, no memorial is planned at this time.
Read Less

There are no events scheduled. You can still show your support by sending flowers directly to the family, or planting a memorial tree in memory of James "Jim" Bell.
Plant a Tree

We encourage you to share your most beloved memories of James "Jim" Bell here, so that the family and other loved ones can always see it. You can upload cherished photographs, or share your favorite stories, and can even comment on those shared by others. 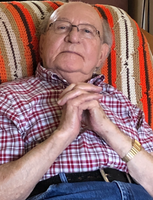