To share your memory on the wall of George Harris, sign in using one of the following options:

Print
George Edward Harris passed away on June 5th, 2020 from complications of heart failure at EIRMC in Idaho Falls. George was born May 16,1939, to Carl R. Harris and Margaret Smith Harris in Helena, Montana. He spent his childhood in Helena except for a... Read More
George Edward Harris passed away on June 5th, 2020 from complications of heart failure at EIRMC in Idaho Falls. George was born May 16,1939, to Carl R. Harris and Margaret Smith Harris in Helena, Montana. He spent his childhood in Helena except for a brief time in Akron, Ohio and attended Helena Schools. He graduated 8th grade from Bryant elementary school, along with his future wife, Elaine. He enlisted in the U.S. Army in the 12th grade and received his GED. He served in the Army from 1956 to 1959 in Korea and Japan. On his discharge he returned to Helena and began working for the Montana Bureau of Public Roads. He soon met up again with Elaine, and on April 2nd, 1960 they were married at First Lutheran Church in Helena, MT. On February 6, 1960 he began his 39 year Airline career with Western Airlines in Helena. In May of 1960 he transferred to Idaho Falls where he remained through his retirement from Delta airlines in 1998.
George was a Past President of the Idaho Falls SnoSnoopers Snowmobile Club, as well as the Upper Snake River Dog Training Club. During his career with the airlines, he organized and hosted many "Airport/Travel Agency" parties at his home. He was known and respected in the Idaho Falls travel industry for his knowledge and willingness to help. In his retirement years he enjoyed playing golf and was active on the Idaho Falls Sr. League. He volunteered in his church for many years helping coordinate Blood Drives for the American Red Cross. He also volunteered in the Fellowship ministry preparing and setting up the fellowship hall each Saturday for many years. He enjoyed the Men's Thursday morning Coffee Klatch as well as participating in the Men's Ministry activities at FELC. He was a mentor and sponsor to a couple of special young men as they went through their confirmations.
His greatest joy was spending time with his family and he especially enjoyed watching his grandchildren in their various sporting activities as they were growing up. He was loved by his children and grandchildren and each one of them will fondly and lovingly remember the nicknames that he gave each of them. He loved the babies and you could always count on him holding and getting to know one anywhere they came together. He was thrilled when his 6 Great Grandsons came along, and just prior to him being hospitalized, he received the news he was going to be Great Grandpa to a baby girl who would have his name as a middle name. He was thrilled to hear that news and was excited with anticipation of a new baby, and especially a girl coming into the family. He was loved by his church family and many old and dear friends he made in his work and his play. He will be missed.
He is survived by his wife of 60 years, Elaine, son Brad G. Harris of Tulsa, OK, daughter Stacie (Kelly) Stoddard, and Karrie (Todd) Wackerli, both of Idaho Falls. Grandchildren, Dannielle(Ross) Ginkel, and Gt. Grandsons Miles and Evan Ginkel of Meridian, ID, Brandon Miller of Idaho Falls, Justin (Casey) Wackerli and Gt.Grandsons Neko and Oken Wackerli of Sandy, UT and Jarrett (Katelynn) Wackerli and Gt.,Grandsons Brayden and Kamrin of Idaho Falls. Former son-in-law Layne Miller (Teresa), Idaho Falls. Brother Terry Harris of Helena, sisters Carla Harris Hedge, Glendale, AZ, Elaine Harris, Glendale, AZ, and brother Raymond Harris, Akron, Ohio, sisters-in-law, Edwina Lobb and Dona (Alan) Reynolds, brothers-in-law, Matt (Mary) Kunnary and Cliff (Cyndi) Kunnary, as well as many very loved nieces and nephews and extended families.
He was preceded in death by his mother Margaret, father Carl, stepmother Catherine, brothers Richard T. Harris and Phil L. Harris, brothers-in-law Paul Lobb and Dave Hedge An evening of memories will be held at Buck Miller Hann on Monday, June 8th 5:00-7:00 pm. Funeral services will be at First Lutheran Church, 455 W. Sunnyside Rd., Idaho Falls, 2pm. In lieu of flowers, George suggests any memorials be made to the Grace Notes Choir, Happy Stitchers, First Lutheran Pre-School or the Youth Mission group of First Evangelical Lutheran Church.
We encourage those who wish to give their condolences to attend a visitation on Monday, June 8th at 5-7 pm at Buck Miller Hann Funeral Home. Because of the Covid virus, there will be limited seating on Tuesday. The funeral will be available to view, live, on Tuesday, June 9th at 2:00 pm. It can be viewed at www.FirstLC.com
Because of the limit of people at the church, the family will be hosting anyone who wishes to come to the Wackerli Residence from 4-7 pm after the service. Food and drinks will be provided.
Military Rites will be held at a later date.
Read Less

To send flowers to the family or plant a tree in memory of George Edward Harris, please visit our Heartfelt Sympathies Store.

Receive notifications about information and event scheduling for George

We encourage you to share your most beloved memories of George here, so that the family and other loved ones can always see it. You can upload cherished photographs, or share your favorite stories, and can even comment on those shared by others.

Love Lucy Sanders, Wade and Kim Nelson and family and The Rodgers Family sent flowers to the family of George Edward Harris.
Show you care by sending flowers

Posted Jun 18, 2020 at 04:02pm
Dear Harris Family,
Both Sherry and I wish to express our sincere condolences for the loss of George, he was a great man and we are grateful for his friendship and service in the community. He will be greatly missed.
Sincerely,
Dane & Sherry Watkins
Comment Share
Share via:
MB

Posted Jun 09, 2020 at 05:33pm
George interviewed me for my job as a Flight Attendant for Western Airlines. He sent me on to SLC and LAX for my final interview. I was hired in 1970. I flew out of MSP and then out of LAX. While I flew out of LAX I commuted from Idaho Falls. I retired in 2016 from Delta. George always treated me with so much kindness. He was a good friend of my parents too. I am sorry to learn if his passing. May the sweet memories of your husband and father bring you peace and comfort, and eventually bring smiles and laughter. My deepest condolences for your loss.
Comment Share
Share via:
KL

Posted Jun 08, 2020 at 08:48pm
I never had the pleasure to meet George, but by knowing Brad, I am absolutely certain he had to be a great father and husband. My condolences to the entire family .

Posted Jun 07, 2020 at 04:03pm
Our thoughts and prayers are with you all. George will be missed by everyone who knew him. He was a great friend to all of us. He will watch over you

Tender Tribute was purchased for the family of George Harris. Send Flowers 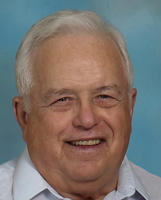